Josh had been a kettlebell coach for a number of years when he injured his wrist. 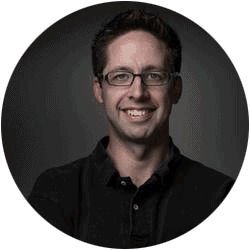 How He Got His Strength Back

Parallettes One helped Josh work around his wrist injury while building real strength and control.

If you do a quick Google search of Josh Hillis, you’ll see he’s a badass expert on fat loss, has published a top-selling book with world-renowned strength coach Dan John, and has been teaching kettlebells for over a decade.

But when Josh started training with parallettes, none of that mattered.

He was just a guy with a really bad wrist injury. And he wanted to get back to training after that injury, a bad breakup, and two failed businesses had thrown him off the rails.

Our Parallettes One (P1) program helped him work around his wrist injury so he could build his strength back, but more importantly, Josh said, “it was the first thing in at least a decade that I did for me, for fun.”

We have retired Parallettes One, but you can still learn a lot from Josh’s story! And if you want to build the kind of strength and control he learned with P1, check out our Integral Strength program.

Despite having injured his wrist pretty seriously a few years back, Josh was able to build serious strength with the parallettes, since they allowed him to safely train around his injury.

“After having gone to a bunch of surgeons, and even a hand therapist, P1 ended up being really friendly to my wrists, which was cool. The strength kept getting better, and it stopped hurting. I tried push-ups on a yoga wedge, and I was like, ‘That’s fine.’ And then I got to where I could do it on the ground.”

Let’s take a look at how Josh did it.

“I couldn’t do a push-up on the ground.” 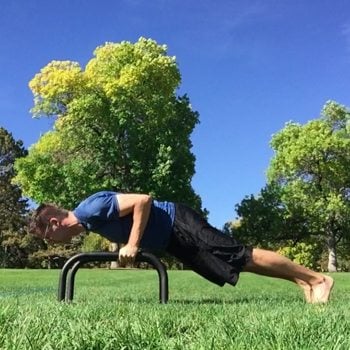 Josh, like many others who find their way to the parallettes (aka “p-bars”), needed a way to build upper body strength without straining his injured wrist.

He shared that “I had injured my wrist about two years earlier working on 80-pound military presses, and something snapped in my wrist. I went to a bunch of doctors and no one could agree on what it was. I realized that I could do push-ups with push-up handles, but I couldn’t get that [extension] to do a push-up on the ground.”

Not only did the parallettes allow him to build strength without fear of exacerbating his wrist issue, but P1 helped him strengthen his wrist by building skills progressively and emphasizing proper mechanics and conditioning.

He wound up working toward skills he could never have dreamed of a few years prior.

“Every month I did the impossible.” 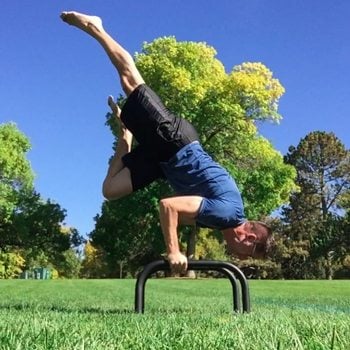 The coolest part of P1 for Josh was the feeling of doing the “impossible” with each phase of the program. He looked back on when he started with P1:

“The first workout I did was impossible. It was more than hard. It was impossible, and then by the end of the month, I’d be able to do it all. Every month. it was like, ‘What impossible thing am I gonna get to do at the end of this month?’ It was amazing. It was so fun. It would go from being this ridiculous challenge in the beginning to watching it slowly get easier, pick up these little bits and be like, ‘Oh, man. I can actually control that little bit now.'”

His favorite skill, by far, was the Bent Arm Stand, which he continued to work on for several months after completing P1 (it took him 9 months in total to nail it–that’s some dedication!). Josh said, “It was such a fun, cool, challenging skill!”

And later on, he even worked up to doing a Bent Arm Stand on the ground, which was totally unthinkable with his wrist injury before P1.

So How Did Parallettes One Work So Well for Josh?

Parallettes One is a 12-week program that systematically builds pressing and inverted skills, like Bent Arm Stands, L-Sits, Shoulder Stands and more.

It helped Josh build serious strength by starting with basic positions and building upon those with transitional movements. The steps are laid out clearly so that it’s adjustable to whatever level you’re starting from and whatever limitations you may have.

For Josh, building this systematic strength in the context of the parallettes made it possible for him to work around and strengthen his wrist. Working on the p-bars puts the wrists in a neutral position, which relieves the pressure that’s often caused by bending the wrists to place the palms flat on the ground.

In Josh’s case, he strengthened his wrist so much that he is now left with minimal limitations, and has been able to pursue handbalancing skills that never would have been possible a few years ago. 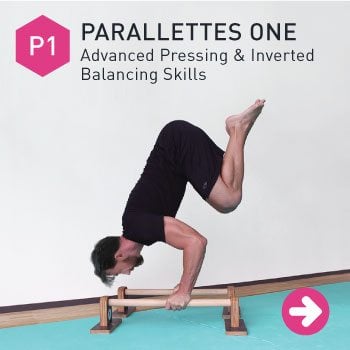 “I’m doing a pretty intense handstand program now. I spend a lot of time on my hands. If you told me three years ago, “Yeah, you’re going to do 25 minutes of handstands tomorrow,” it would have been ridiculous. So that’s light years apart.”

For Josh, P1 wasn’t just a fitness program. It was an empowering process of building strength despite a serious injury, and of discovering the joys of putting in the work and seeing the fruits of his labor.

He went in to P1 thinking he’d never be able to achieve the skills as laid out, but he gained so much more than cool skills. He gained true physical autonomy.

We have retired Parallettes One, but you can still learn a lot from Josh’s story! And if you want to build the kind of strength and control he learned with P1, check out our Integral Strength program. 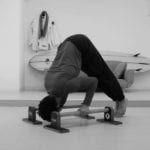 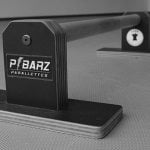 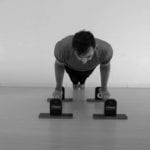 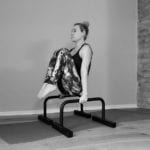 The Benefits of Parallettes Training and How to Overcome Challenges