On his 59th birthday, Stephen Stern looked in the mirror and saw an old pattern repeating itself. He’d let himself get overweight and out of shape. Again. 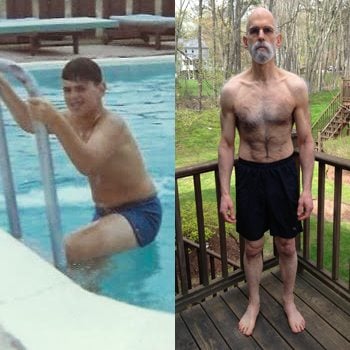 Stephen went through some pretty dramatic swings in his weight, but he’s now in the best shape of his life at 65 (right).

“I gained more weight again,” Stephen recalled. “I wasn’t obese, but I felt really uncomfortable in my body.”

Stephen’s pattern was always the same. He’d launch into some intense exercise regimen, put in hard hours every day, lose a bunch of weight, and hit some tough goals.

But then he’d just stop. For months, he would hardly exercise at all. He’d gain weight and lose the abilities he’d just worked so hard to achieve. And then one day he’d look in the mirror and start the process all over again.

This time, only a year from turning 60, Stephen knew the stakes had changed.

In his chiropractic practice, he’d seen patients his age and younger who’d lost the ability to do things they loved – not just through injury or illness, but often through simple neglect of their bodies. He knew that when people at his stage of life lost physical capabilities, often they never got them back.

“When I turned 59 I decided, by the time I’m 60 I want to be fit again,” Stephen said. And this time he needed to break his feast-or-famine cycle. So he decided to try something different. 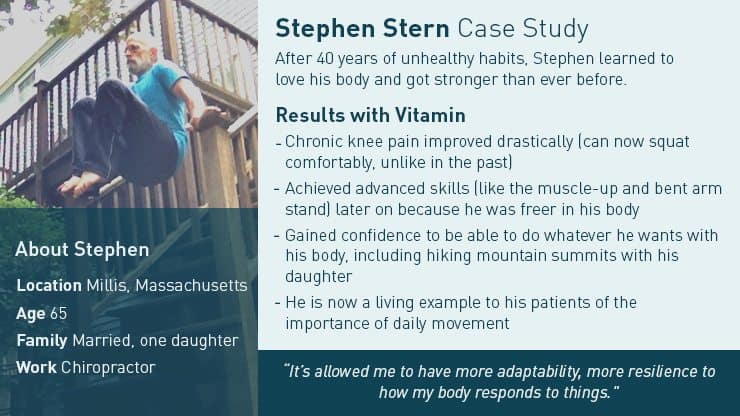 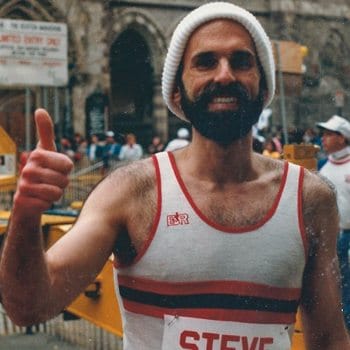 Here’s Stephen after running the Boston marathon in 1987.

Stephen grew up the youngest and least athletic of three brothers.

“Going through my adolescence and teenage years I was always carrying an extra 20 or 30 pounds, and never really felt comfortable in my body,” he said.

At 18 he decided to lose the extra weight, and started to find a new confidence in himself. But his dieting and exercise soon became extreme. He obsessed about eating a certain way and started cycling 50 miles at a stretch to burn calories.

But he quickly burnt out and put on more weight than ever – gaining nearly 100 pounds in one year.

In his 20s, Stephen dove into yoga, then weightlifting. “I’d really get involved very intensely, and then I’d go off the wagon and balloon up again,” he said.

Then in his 30s he took up long distance running, which Stephen said “really fed the compulsive, addictive side of me.” He recalls “years where I maybe missed five days the whole year.” But that intensity took a toll.

“Looking back now, I can see how I really abused my body,” he said.

He was chronically tired and sore. And a damaged knee was in near constant pain. “I’d have to walk down steps sideways because my left knee couldn’t handle the angle of going straight down,” he said.

Stephen kept running in his usual all-or-nothing style into his 50s. Then he started losing interest in running stopped doing it consistently.

He started gaining weight and his old feelings of discomfort in his body bubbled to the surface again. He knew he needed to take back the reins of his life without letting unhealthy obsessions take over. 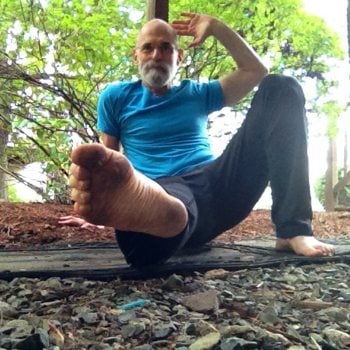 One cold November day, right after his 59th birthday, Stephen looked outside at the heavy snow on the ground and decided, instead of going for a run, he’d try going for a walk.

A lightbulb went off as he realized that gentle exercise didn’t hurt his body the way intense running had.

That simple stroll started a journey of discovery that would take him through various training modalities, including some sidetracks into not-so-gentle approaches along the way.

He spent several months working through programs like P90X and Insanity, but, he said, “I never could finish a 3-month program without getting injured. It also got very repetitive and boring.” That led him to kettlebells and calisthenics, and eventually, to GMB and our Vitamin movement course.

“I was looking for more creativity, safety, variety, and something that really engaged me in a conscious way, not just counting reps. When Vitamin came out I saw a promo that talked about play and exploration, and it was only a month long, and we’d be doing different things every day. That sounded appealing at the time, that there was something new every day that I could work with. And it wasn’t like I had to do a full workout around it, I could just do it as a warm-up or as a cool down. It didn’t seem like a ‘program’ I had to follow verbatim. There was a lot of freedom with it.”

For the first time in over 40 years of training, Stephen started to feel like his body was his partner in the process of getting healthy and fit rather than an adversary he was constantly struggling with. “Vitamin allowed me to look at my body in a way that connected me with what’s going on in the moment, so that I could honor it and respect it, and not make it do something it’s not ready for,” he said.

Since every day of Vitamin had a new movement to practice, Stephen was forced to take things one day at a time, which slowed down his obsessive side.

As the course progressed, he tried every single movement. And unlike his days of pushing through the pain of long runs, he started paying attention to what his body was telling him about his abilities and his boundaries.

“My ego would get in the way at first and I’d want to see if I could do the more advanced variation, and then I’d have to back off. Eventually, I let go of what I had to accomplish and just got into the moment. I started just feeling where my body was in that moment, on that day, at that time. Vitamin really encouraged that, and helped me move from ‘here’s what my body is supposed to do’ to ‘here’s what my body is feeling right now, and what does it want to do right now to accommodate that movement.’ That’s what Vitamin nurtured over time in me.”

Plus, for the first time since injuring his knee more than 40 years prior, Stephen started regaining the ability to engage in activities that used to cause him aggravation (like squatting and walking down stairs).

The Result? Stephen Now Moves Better at 65 Than Many People Half His Age 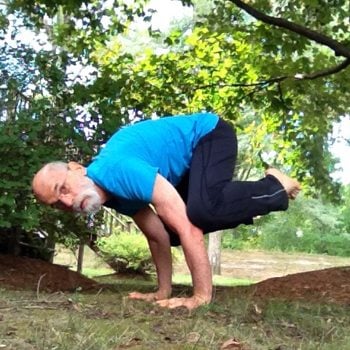 “I don’t like saying I move like a younger man,” said Stephen. “I’m an older man and I move the way an older man can move!”

Since going through Vitamin, Stephen has gone on to accomplish things most 30-year-olds can’t do. He can do smooth and controlled muscle-ups and skin-the-cats after going through our Rings curriculum. He makes the bent arm stand on the parallettes look easy. And after several years of going through our curriculum, he became a GMB Trainer so he could incorporate the things he’s learned into his chiropractic practice.

His physical priorities have shifted from his old mindset of looking a certain way or clocking a certain number of miles on the pavement.

Since going through Vitamin and learning the joy and benefits of playful movement, his goal now, he said, “is to maintain that kind of vibrancy in my physical body, and mentally and emotionally to continually let go of the parts of me that don’t serve the greater good.”

But even though his weight is no longer such a preoccupation for Stephen, his body composition is the best it’s ever been. Now nearly 66, Stephen reflected on his years of hard distance running, “I wasn’t as fit as I am now. I wasn’t as lean as I am now. I was probably carrying 20 extra pounds compared to now, even though I was running all those miles.”

“There’s a sense of peace that comes from feeling competent in the body. The other day I was doing something and I missed a step, and I caught myself really simply. I was thinking, ‘Gee, a lot of people my age would have really hurt themselves doing that.’ But to me, it was no big deal. There’s a certain competency I have in my body and a certain amount of confidence that knows I can take care of myself and be self-sufficient, which is very satisfying for a person who’s aging. It’s not like I’m old and feeble, or anything like that. But I’ve seen many people my age and younger who can hardly move.” 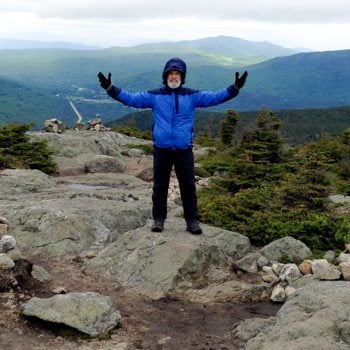 Stephen first started exercising to lose weight. And his discovery of Vitamin was even prompted by a desire to shed some pounds. But the biggest benefits he gets from his GMB training aren’t his lean build or even his impressive movement skills.

“It’s allowed me to have more adaptability, more resilience to how my body responds to things. It’s given me more confidence in how I can move. I feel more competent. It’s allowed me to learn my limits or boundaries of what’s safe or risky for me. It’s allowed me to get a sense of exploration that allows me to trust my body more about what it’s experiencing. It’s helped cultivate trust in my body.”

And with that confidence in his body, he’s been able to connect with his 30-year-old daughter, Rachel, in a way very few 65-year-old fathers can do.

“She and I hike mountain summits together. We did this one hike. It was like a magical weekend. We just spent all weekend hiking, just the two of us. To see her put that much effort into climbing to the top of the summit, for a father to see her work through a struggle like that, it gave me a lot of joy to see how she’s matured. I want to continue those kinds of experiences with her.”

Before Vitamin, Stephen exercised to maintain a certain body composition and to get a feeling of achievement. And those are good outcomes, but Stephen has found a better motivation. He trains because it brings him joy – the joy of what his capable body can do, like hiking summits with his daughter, and even the joy of playful movement itself.

“It tickles my joy itch to move this way,” he said with a huge grin. “There’s a certain contentment and satisfaction, an inner smile, that comes from exploring the body and connecting with it in a healthy, creative fashion.”

Playful Training for Confidence and Control

With Vitamin, you’ll build confidence and creativity in your movement by practicing fun skills every day, so you can enjoy real freedom of movement. 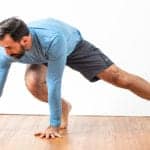 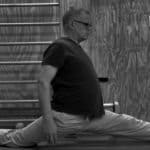 How Charlie Went From Stiff to Splits at 63 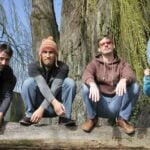 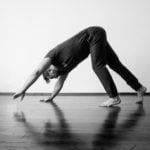 What "the Basics" Really Are, and How to Build Them