But here’s the catch.

You actually can’t replace most movements you do using a barbell or dumbbell with bodyweight alternatives. Some bodyweight exercises are similar because they replicate the movement plane of the gym version, but they shouldn’t be considered a replacement.

The main difference is the ability to load the movement and equipment, or lack thereof.

So, instead of trying to replace that barbell deadlift with a bodyweight alternative, don’t. Here’s a better idea: Learn how to train correctly with a high intensity using only your body weight.

We’re going to cover some ideas about why there’s a difference between bodyweight and weight training, and how to make the right choices for your movement practice.

We’ll begin with explaining how the training styles differ, why adequate control of your body weight should be the foundation of strength training, and some clear examples of how bodyweight training differs from gym training.

We’ll also give you some examples of how bodyweight training can assist with any other training you’re doing.

They’re similar in that you’re challenging yourself with resistance to the muscles and joints. And you’re moving in similar planes, but that’s about it.

The way you go about increasing the load with bodyweight training requires a different approach. To be clear, you can get very strong using bodyweight only, just as you can lifting weights. 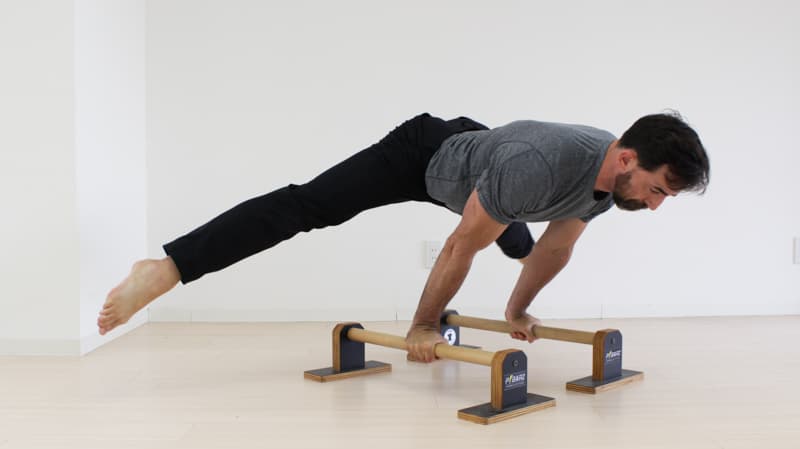 💡 Ready to get strong with bodyweight training?Download our free beginners bodyweight routine and get started as soon as you’re finished reading.

Weights are much easier to gauge in terms of the progress you’re making, so you can easily turn off your brain and rely on your logbook to see if you’re making progress.

For example, a barbell bench press evenly distributes a load across a piece of iron, to which you can continue adding weight to as you get stronger over time. But a push-up is about using your body as resistance, and you can’t load it as easily as a barbell.

Instead, you have to manipulate your body weight to increase the intensity, and that requires adjusting your body’s position, angle, and your hand placement.

The main similarity is the bench press and push-ups work similar muscles; chest, shoulders, and triceps. And it ends there.

This idea also applies to other movements like the deadlift. We get more into this with a specific example below.

Bodyweight Training Is Not ‘Basic’

… or only for beginners.

A common misconception, especially for gym-going puritans, is that bodyweight training is far too basic, even beneath them. But if you ask a typical gym rat to do a proper set of 10 push-ups or 20 bodyweight squats, many of them will fail.

And forget about asking them to plop up on their hands for a handstand, or to hold a front lever.

Most people lack the proper strength foundation that comes from doing regular bodyweight movements. One reason for this is a lack of control or coordination can be masked when using weights or machines because you’re typically in a rigid position.

But when using bodyweight movements, especially those that require balance and stability, you’ll discover you have a lot of weak points, and many of those can only be addressed with adequate bodyweight training.

An example would be to take someone with a strong upper body who can push a lot of weight in the shoulder press machine. But when you have them do Bear crawls for sets of 30 seconds, their arms shake and they get fatigued quickly, often having to take a break to catch their breath.

Forget about having them do inverted push-ups or trying to stick a handstand, because those movements will require much more coordination and stability.

Here’s Eduardo, one of our GMB Lead Trainers, demonstrating the Bear and Monkey in a small space. This is basic locomotion in practice.

Notice that he makes it look easy, but when you try it for yourself, it’s pretty tough to do it as smoothly has he does.

Bodyweight Training as a Foundation for Other Goals or Sports

We have plenty of clients who combine our programs with their training or sport of choice, giving them more mobility, control, and a stronger foundation to stay safe and strong.

If you’re brand new to bodyweight training, the best place to start is with Elements. You’ll learn how to use your body in a way that might surprise you as you gain strength, mobility, and control moving in ways that mimic real-life movement—twisting, squatting down, and moving from side to side.

So how do you know what’s best for you?

You want to use the right tools for the job.

In short, if you’re looking to compete in a sport like powerlifting, or build big ole muscles, you should be training with weights for those purposes. But if you want more strength and control over your body, our GMB Method of training is ideal.

If you’re training with weights, you should still be utilizing bodyweight training as it’ll only support your main goals.

In this video, Ryan breaks down the smart way to go about choosing movements that work toward your original goal (more strength, better mobility and stability), as well as complementing other goals you have with your training (like weight lifting).

Instead, you should think about the goals you have and what movement makes sense based on those goals.

What’s a Bodyweight Alternative for the Deadlift?

Common question, but there is no true alternative or replacement. You see, the barbell deadlift is a specific movement that has its own benefits and drawbacks.

Instead of searching for an alternative, you should be thinking about what movements complement what you’re trying to do.

Yes, you should keep doing the deadlift if you want to. But if you don’t have gym access because of COVID, or you want to train similar muscles that the deadlift works, here’s how to go about it.

Let’s look quickly at the requirements for a strong deadlift.

Now that you see what’s needed, you can work backward and think about the movements you need that will carry over to your deadlift.

For balance and control, as well as a strong core, the Bear, Monkey, and Frogger all help here.

We cover all of these movements in Elements as a way to build this foundation.

If you need a strong grip, working on your pull-ups will help here.

Since you need flexible and strong hips, you’ll want to work on your bodyweight squat, and working on your range of motion until it feels comfortable to squat down with ease. From there, you can work on single-leg squats (like the pistol squat), which will further develop your hips and glutes.

Lastly, a strong back is crucial.

We have plenty of bodyweight back exercises you can do at home that will increase the activation and control of your traps, lats, and rhomboids.

This is a common complaint and misconception about how to train properly with no equipment. 🥱

But what if you don’t have any rings or a pull-up bar at home? It’s a pretty simple fix if you know what to do.

For example, an L-sit done and practiced correctly will train scapular retraction and depression. Imagine pulling your shoulders back and forcing your elbows downward.

This is the same type of movement pattern that happens during a pull-up or row. You’ll also learn to squeeze your lats extra hard when practicing L-sit shrugs.

We’ve had clients get their first chin-up with bodyweight training alone. No gym necessary. 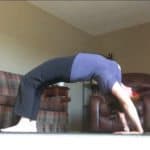 Sandi York
Buffalo, NY, United States
IS
I was never able to do this before

I've lifted weights consistently for over 25 years. When I started Integral Strength, I was skeptical that I could develop the strength and flexibility required. Any flexibility I once had was gone, due to sitting at a desk well over 40 hours a week and driving. I also wasn't the best about stretching after lifting. At least, not consistently. My flexibility has greatly improved, so much so that I am close to getting my L-sit. I also achieved my first unassisted chin-up from a dead hang. In all those years of weight training, I was never able to do chins without the assist of jumping from the ground.

Finally, the goal here is to think about the application of your exercise. What’s standing in your way and what can you do about it?

Instead of trying to replace gym movements with bodyweight alternatives, think more in terms of what you’re trying to accomplish. Want more pressing strength? More back and grip strength? Want stronger legs and core?

What bodyweight movements will make those goals a reality?

Start by asking this question and you can pick the right movements from our bodyweight guide accordingly.

To get going, we recommend you start by assessing where you’re at. Then you can know exactly what your weaknesses are and how to begin addressing them.

In our programs, we walk you through the assessment and then help you build a strong movement foundation from there. If you’re new to bodyweight training and want to begin properly, we recommend you start your journey with Elements. 👇 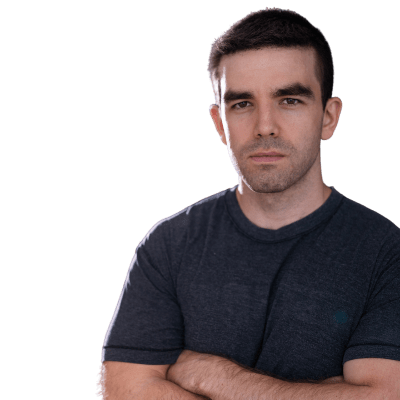 A former fat boy turned personal trainer turned fitness writer and researcher. JC likes to teach people how to use their brains to reach levels of health and fitness they never thought possible.

Much of his time is spent reading, writing, and thinking about thinking.