Editor’s Note: We’re excited to introduce this guest post from Al Kavadlo, one of the world’s leading experts in bodyweight strength training and calisthenics. Today, he’s sharing his expertise on achieving the human flag. Scroll down to learn more about Al.

Imagine a person suspended sideways on a vertical pole, completely parallel to the ground, with no points of contact other than their own two hands. 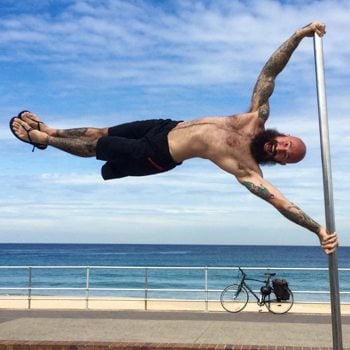 Until you’ve witnessed it for yourself, it’s hard to believe the human flag is even possible. The unique combination of strength, stability, and control required is unlike anything else in the calisthenics kingdom.

Visually, it’s one of the most eye-catching skills in the bodyweight world, but there’s so much more to the flag than just showing off in front of your friends.

Training for this unique exercise will strengthen every muscle in your body, as well as toughen up your tendons, ligaments, and other connective tissues. The ability to do a human flag demonstrates a high level of strength and control, but even just the process of working toward this skill will help you improve those attributes.

Human flag training builds mental fortitude, too. The body and mind must both be strong to perform this ferocious feat.

In this tutorial, I’ll show you what it takes to get the human flag, and take you step-by-step to master this impressive skill.

Grasping at Poles: What Does it Take to Get a Human Flag?

Like any advanced bodyweight skill, training for the human flag can be a long, slow journey.

Hand Placement for the Human Flag 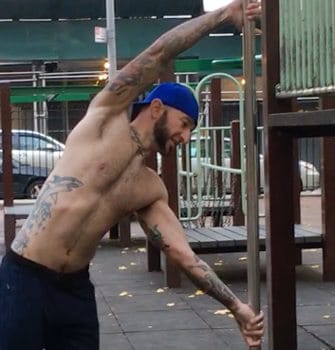 The human flag is typically performed by grasping a vertical pole, with the top hand in an overhand grip and the bottom in an underhand grip facing the opposite direction. (The bottom arm will be positioned so that the elbow faces downward.)

You can feel free to experiment with different hand positions, however, to find what works best for you.

Performing the human flag between a pair of parallel horizontal bars (such as stall bars or rungs on a ladder) is another way to practice the move.

Though the parallel bar flag appears similar to the flag performed on a vertical pole, most people will find this variation a bit less difficult, as a more stable foundation can be achieved due to the fact that the hands face each other in a neutral grip.

If you have access to a set-up that allows for this, it’s a great way to work toward the human flag.

Benefits of Training for the Human Flag 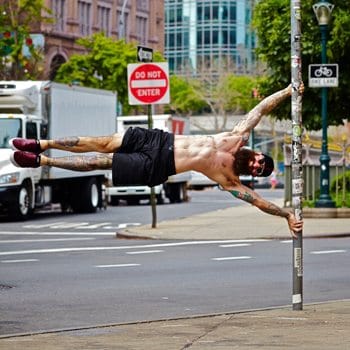 While I consider the human flag to be a full body exercise, the main muscles involved are the delts, lats, and obliques.

You’ll need a good foundation of strength from exercises like pull-ups and handstand push-ups (or barbell presses) before you begin training the flag. Additionally, the glutes, abs, and legs have to work harder than one may think.

The flag is also an enormous proprioceptive challenge. There’s no other exercise that requires the unique spatial awareness needed to suspend your entire body sideways with no contact points beyond your two hands on a vertical pole.

Furthermore, the extreme stabilization required for this move demands synchronicity between antagonist muscle groups. High-level calisthenics generally require levels of skill and precision that only come with dedicated practice. The human flag is no exception.

Though it’s worth practicing the flag on both sides, most people will find it comes a bit easier on one side than the other.

Much of the burden appears to rest on the bottom arm, but typically people are stronger with their dominant arm on top. This is due in part to the tremendous gripping requirements of the top arm, as well as the extreme lateral chain involvement of the top half of the body.

The key to progressing with the flag is to find similar positions that allow for better leverage. Part of what makes the full human flag so challenging is that you’re using a relatively short lever (your arms) to hold up a very long object (your body).

Since you can’t really make your arms longer, you need to find ways to make your body shorter in order to make the flag more manageable.

By exploiting that principle of leverage, the following 5 progressions can help you gradually build the strength, stability, and coordination needed to perform the full human flag.

Let’s look at each of these steps in detail: 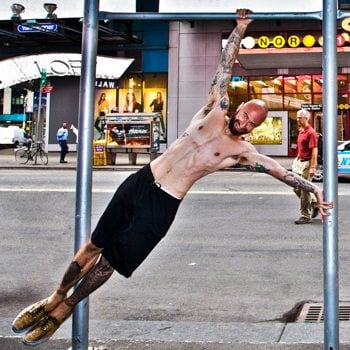 This flag variant will start to give you a feel for the full press flag while allowing for considerably more favorable leverage and less proprioceptive confusion. You will need a pull-up bar with a vertical support to practice this exercise. 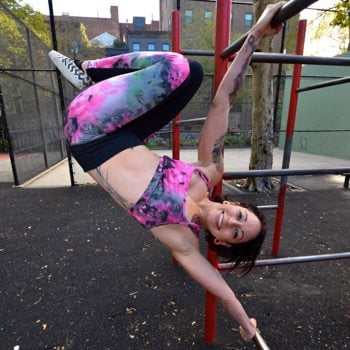 Once you’re able to hold the support press for 20 seconds, you can begin the transition to practicing with your top hand positioned directly above your bottom hand.

As the leverage here becomes significantly more difficult, we’ll be elevating the hips above the shoulders and bending both legs to compensate. Changing the angle and shortening the length of your body will allow you to get a feel for holding yourself sideways against a vertical pole without having to overcome your entire body weight. 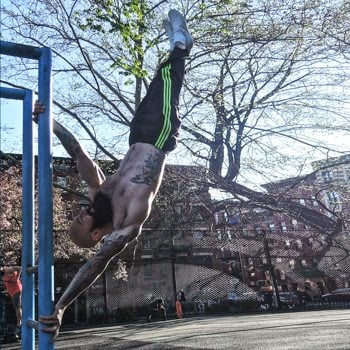 After establishing a solid 10-second chamber hold, you can begin lengthening your legs to prepare for what it will feel like to move toward a full press flag.

For this variant, you’ll aim to keep your body closer to vertical than horizontal, almost like a crooked handstand. The vertical flag requires less strength than the horizontal version but starts to give you a taste for the full expression of the move. 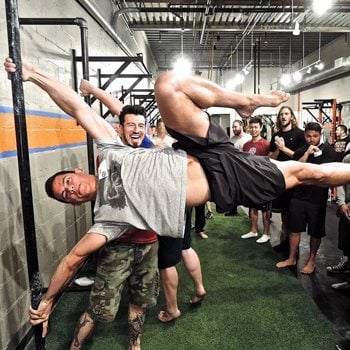 Once you can hold the vertical flag for 10 seconds, you can work towards lowering your hips down with one or both legs in a tucked position.

Feel free to experiment with different leg positions to find what works best for you. Remember, any modification that improves the leverage is a good way to work towards the full human flag. 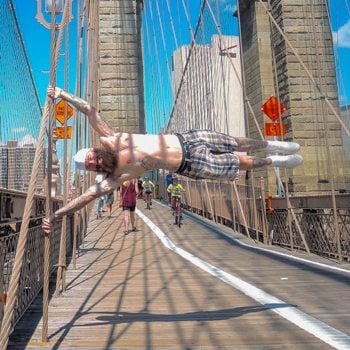 There are essentially two ways of getting into position for your human flag: from the top down or from the bottom up.

For either method, you will need to press into the pole as hard as possible with your bottom arm while squeezing and pulling from your top arm. You will also need to focus on keeping your entire body tense.

Embark on a Flag-Tastic Voyage 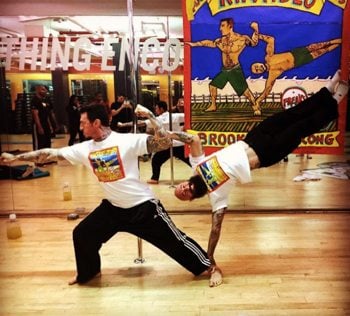 If you don’t have access to a proper pole or stall bars for practicing the human flag, feel free to get creative. Any stable surface that allows you to get a good grip is fair game. I’ve flagged on sign posts, scaffolding, trees, trucks, parking meters and even my brother Danny!

The human flag is an ambitious pursuit, and depending on where you’re starting from, it could take anywhere from a few weeks to a few years for you to work your way through these progressions. Respect your level and take your time with each step as needed.

If you want to know more about the human flag and other fun bodyweight exercises, check out Al’s new book Street Workout.

Here’s a quick summary of the steps it takes to get the human flag: 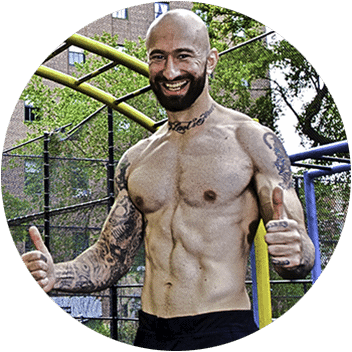 Al Kavadlo is one of the world’s leading experts in bodyweight strength training and calisthenics. The author of several books, including the Amazon bestseller Street Workout, Kavadlo is also known for his appearance in the popular Convict Conditioning book series. Famous for smiling while performing some of the most difficult bodyweight exercises imaginable, Al has racked up millions of views on his YouTube channel.

As lead instructor for the Progressive Calisthenics Certification (PCC), Al gets to bring his unique coaching style to fitness trainers and enthusiasts around the globe. Al has been featured in The New York Times, Men’s Health and The New York Post. He is also a regular contributor to Bodybuilding.com. To find out more about Al, click here to visit his website.

The human flag is an advanced skill, and you might not be ready for it quite yet (that’s okay!). Integral Strength will help you build a foundation of strength you can apply to whatever is important to you, including working up to a human flag. 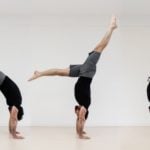 How to Do a Handstand: 9 Detailed Lessons Covering Prep, Progressions & Training Plans 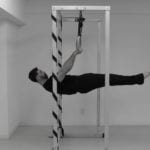 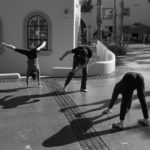 Training All Damn Day: How Much Should You Be Working Out?